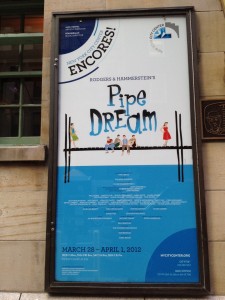 Last week New York City Center presented the musical Pipe Dream as part of their Encores! series. As a teaching artist for City Center, I had to do some research on the show and found it has a pretty interesting history. Pipe Dream is based on the novel “Sweet Thursday” by John Steinbeck. After writing the short novel Canary Row, the big-shot producers Feuer and Martin (who were flying high after recently producing Guys and Dolls) approached John Steinbeck about adapting it into a show.  Apparently John Steinbeck was really into the idea of having one his works adapted for the stage.  However the producers didn’t feel “Canary Row” was quite right; they liked the world, but not the story. Steinbeck was like, “Alright, then I’ll just write a sequel to Canary Row with some of the same characters but a different plot, and we’ll adapt that into a musical!” Everyone thought this was a great idea. So he did, and that novel became “Sweet Thursday”.  It was published.  Now the producers needed a writing team.  They originally wanted Frank Loesser, but he passed because he was tied up with a project that becameThe Most Happy Fella. So Feuer and Martin were like, “OK, I guess we’ll settle for Rodgers and Hammerstein.” Rodgers and Hammerstein weren’t exactly enthused about the project.  Particularly the fact that the leading female character, Suzy, was a prostitute.  So they decided to make her not a prostitute…or at least made it very questionable. For Steinbeck, this is where the show lost it’s cohesiveness. After seeing a final version of the show, Steinbeck stated “You’ve turned my prostitute into a visiting nurse!” Seems like after the fact nobody was really happy with Pipe Dream. Rodgers said it was the only one of their works he truly disliked. Regardless, any show written by the most successful partnership in American musical theatre history is worth taking a look at, if only to see what caused it to go astray. 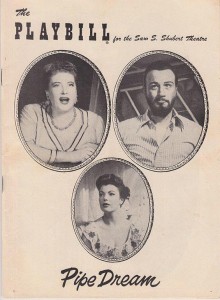 — Beat by Beat Press believes in the power of musical theatre to inspire children. That’s why we create new and exciting musical plays for kids to perform.