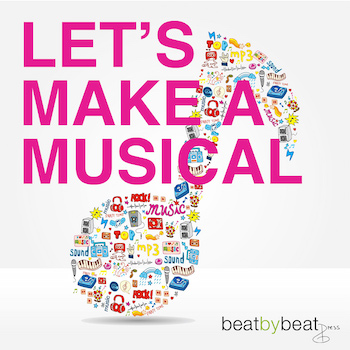 “Let’s Make A Musical”, an interactive new podcast that brings listeners into the process of writing an original musical, has just been released and is now available in iTunes. The weekly show, produced by Beat by Beat Press (www.bbbpress.com), takes listeners on the thrilling ride of creating a new musical from scratch and is geared toward anyone who loves musical theatre.

“At Beat by Beat our new musicals for young actors have reached thousands of communities in over 35 countries around the world,” said Denver Casado, founder of Beat by Beat Press. “We thought it’d be fun to pull back the curtain on how we create these unique shows and involve our audience to participate in the process.”

Within the first few weeks of launching “Let’s Make A Musical” has received thousands of downloads and climbed to #7 on the iTunes Performing Arts chart. In the most recent episode Brian and Denver discuss the importance of the “I Want” song and discuss the many challenges of writing musical theatre lyrics. iTunes subscribers will receive the latest episode every Tuesday morning.

Since launching in 2011, Beat by Beat has become the fastest growing publisher of new musicals for young actors, with over 3,500 drama teachers and directors visiting the website each day. For the past four years Beat by Beat musicals have been the official selection of the prestigious NYC Children’s Musical Theatre Festival.

The “Let’s Make A Musical” podcast can be found on iTunes, Stitcher Radio, or streamed on the official podcast page at www.bbbpress.com/podcast.

About Beat by Beat Press

Beat by Beat Press is a new online publisher of fresh, contemporary childrenʼs musicals for elementary and middle-school age performers. The musical plays for kids are created by a team of professional playwrights and arts educators in New York City, San Francisco and Los Angeles. Since launching in 2011, Beat by Beat has quickly become the #1 resource for schools and theaters looking for unique musicals outside the typical “fairy tale” catalogue. These children’s shows are packaged into online production kits for teachers and directors to easily produce. Beat by Beat is based in New York City and San Francisco.